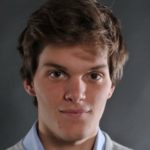 Ever since he was a young boy, Simone has always been attracted by the rich diversity of other cultures. Born in Naples, Italy, he moved to Ottawa, Canada, when he was six years old. He transferred back to Rome, Italy, when he was eleven. Life in Canada, where he completed the primary school, offered him exposure to English and French, and to different lifestyles, thus triggering his potential to communicate and establish relationships with people from other countries. His ability to adapt to new experiences has carried over into his studies and interests.

Simone is a very dynamic person, enthusiastically involved in both curricular and extracurricular activities. In Rome he attended Liceo Classico Torquato Tasso – thus broadening the range of his knowledge by focusing on Ancient Greek, Latin grammar, Italian literature and philosophy.

In 2011, Simone took part in a project organized by the European Youth Parliament (EYP). He participated in the National Session in Piacenza. His committee on constitutional affairs won the first price and was invited to the EYP International Forum in Odessa, Ukraine. The task this time was to find a way for the EU to interact with the global society, while putting the world economy on a more sustainable path.

Simone chose Economics and Management at the University of Rome “Tor Vergata”. After two years he entered the Master in Management at  ESCP Europe Business School where he is presently enrolled at the London Campus. He received his Bachelor Degree (3 years) from the University of Turin in September 2016 and completed his first internship in Milan at Banca Generali S.p.A. – where he worked as Junior Controller from April to September 2016. In the same year, Simone was the most voted candidate in the Agora elections and became Vice President of the organisation which represents all the students from the 5 ESCP Campuses.

He plays competitive basketball since the age of five.